I Agree
How Does The California Supreme Court Work? | CaliforniaCourtRecords.us
California Court Records

How Does the California Supreme Court Work?

The California Supreme Court is the apex court in the state. The court has original jurisdiction in proceedings of:

Upon filing a petition for review with the Supreme Court, the petition is scheduled for one of the court’s weekly petition conferences, except when oral argument is slated for the same day. During these conferences, about 250 cases, the majority of which are petitions for review, are considered. Under California law, the Supreme Court must decide whether to accept the case within 60 days of a petition’s filing. However, the court is authorized to extend this period by up to 30 days.

Even though justices in the California Supreme Court often prepare their memoranda on petitions and allied matters, most of the petitions for review are allocated to one of the court’s central staff (criminal or civil) to prepare a conference memorandum. Returned memoranda from the central staff are used by the Supreme Court justices to assess the merits of the cases and the significance of the issues involved.

Several memoranda in death penalty cases are prepared by the central capital staff and voted on. A minimum of four justices must concur before the Supreme Court decides to review or take other action. Sometimes, a Justice may request that a case be suspended for further consideration and taken up again at a later conference.

The Justice may also circulate a supplemental conference memorandum to elaborate or differ from the initial conference memorandum’s analysis or recommendations. Where the Supreme Court grants reviews, the court may specify which issues should be briefed and argued. The court may also advise the parties to address further relevant issues not initially covered in their petitions or briefs. The majority of the cases accepted for review are eventually argued orally before the full court and decided by a full written opinion.

However, in situations where a case brought before the conference raises an issue that is already before the court in another case, the Supreme Court may decide to grant and hold the new case until the lead case is resolved. Upon the filing of the lead opinion, cases that have been held for that opinion are reassigned to the Court of Appeal for reconsideration because of the lead opinion. If in light of the lead case opinion, a held case looks to have been rightly decided by the Court of Appeal, a review may be dismissed, thus precluding further appeal. On the other hand, without hearing an argument, the Supreme Court may move a case back to the Court of Appeal for further deliberation because of an opinion filed after the lower court’s decision. In recent years, approximately 5% of petitions for review and other proceedings filed with the Supreme Court have been granted review each year.

Once a case is accepted, one the Justices is assigned to prepare the calendar memorandum in support of the review to be granted. Contained in the calendar memorandum are facts, analysis of the legal issues in the case, and a recommendation about the case’s disposition. The memorandum is forthwith circulated to all the justices in the court for review and response. The process may also require the authoring justice to issue responsive memoranda and circulating concurring or dissenting memoranda. Following an extended period set apart for considering the matter, the Chief Justice holds a pre-argument conference. If the majority of the court’s justices agree that the matter should be heard, it is scheduled for oral argument.

Oral arguments are very technical discussions of statutes and previous appellate court rulings and rarely on the pieces of evidence in a case. It is a presentation by an attorney to the panel of justices, summarizing legal reasons that the attorney hopes will provide a good chance of obtaining a favorable ruling for the defendant. Each side in an oral argument in the California Supreme Court have 30 minutes to argue its case before the court. However, in death penalty cases, the time may be extended to 45 minutes for each side.

After an oral argument, the justices further discuss the case in the court’s private conference and then make a tentative vote. Suppose the majority of the Supreme Court justices agree with the recommendations of the authoring justice of the calendar memorandum, the justice drafts a proposed majority opinion. However, where the majority view opposes the opinion contained in the calendar memorandum, the Chief Justice designates one of the majority justices to write the proposed opinion. The designated Justice circulates the proposed majority opinion. Dissenting or concurring opinions may be written and circulated by the other justices while the majority opinion may be amended with respect to the points raised in concurrence or dissent. The Supreme Court files its written opinion within 90 days after the oral argument.

For convenience, the California Supreme Court files its decisions twice a week; Mondays and Thursdays at 10:00 a.m. Decisions are made publicly available in the clerk’s office and on the California Courts website. However, a decision does not become final until 30 days after filing. Within 15 days after filing, a petition for rehearing may be filed by the parties. Upon its own motion or that of an involved party, the Supreme Court is authorized to extend the 30-day period by up to an extra 60 days to consider whether to grant a rehearing or modify its decision. Upon filing a decision, the reporter of decision reviews and prepares it for official publication, initially in softcover advance pamphlets and subsequently in the Official Reports’ bound volumes.

The California Supreme Court’s responsibilities include adopting the Code of Judicial Ethics in the state. This Code covers rules governing judges’ conduct, both on and off the bench. It also covers the conduct of judicial candidates in their campaigns. The court reviews the recommendations of the State Bar of California regarding the disciplining of attorneys for misconduct. It possesses a discretionary review of decisions by the Commission on Judicial Performance to reprimand or remove a judge for misconduct. Asides these, the only other review matters heading directly to the Supreme Court are appeals from decisions of the Public Utilities Commission. The California Supreme Court publishes its decisions in the California Official Reports available on the court’s page online.

A Chief Justice and six Associate Justices are appointed by the Governor and confirmed by the Commission on Judicial Appointments. The public also confirms the appointment of California justices via a retention referendum at the next general election. Incumbent justices may be re-elected at the expiration of their 12-year terms in a public vote. An individual must be a member of the State Bar of California or a California court of record judge for a minimum of ten years to be considered for an appointment as a justice in the Supreme Court.

The California Supreme Court hears oral arguments in San Francisco, Sacramento, and Los Angeles, although special Supreme Court sessions may be held elsewhere in the state. The addresses of the court are in these three locations are listed below:

In the California Supreme Court, oral arguments are heard during one week of each month from September through June in its courtrooms in San Francisco, Los Angeles, and Sacramento. However, the court is open and working in other roles throughout the year. 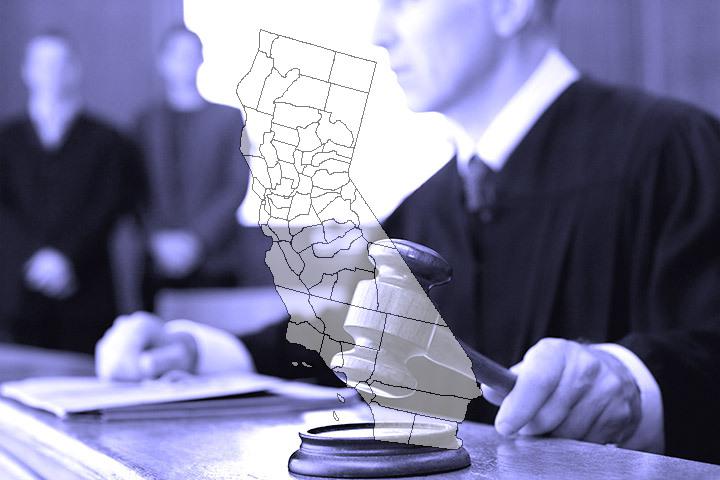